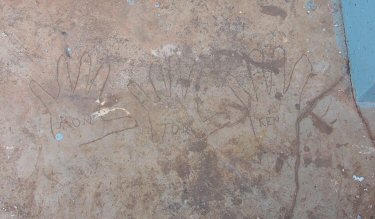 finding time to capture some of my thoughts and experiences into words, although my vocabulary does not contain the right words to describe it.  I don’t know how to begin to tell it all but this is a start.

Simply put, my trip was absolutely wonderful.  Looking back, it all seems as if it were all a dream, as I still can’t believe I was there.  Everything about the trip was great.  The only “negative” experience were the long hours of flying time it took to get there and back.  No one in our group got sick or hurt and we experienced no danger, however, it was incredibly hot and humid.  Not even the hot Texas summers I’ve lived through were as hot as there.  I don’t remember it being so hot and humid; I guess I was used to it or didn’t know better.  March is toward the end of the dry season and the beginning of the rainy season, so the humidity was high.  I actually lost a few pounds from all the sweating and walking.  I got to experience a dust storm followed by a rain storm with high winds that caused tree limbs to fall and tin roofs to be blown away, but I did not hear of any injuries.  It had not rained in five months so it was a welcome sight for the people, except for the damage.  The wind kicked up the dry parched ground and it looked like a scene out of “The Mummy.”  Visibility was only about 50 yards and standing out in it; you could feel the sand against your skin and in your eyes.  After a few minutes into the dust storm, you could begin to smell the rain and then it hit hard, blowing sideways with a lot of debris flying around.  It also brought the temperature down to a very comfortable range.

It was amazing how so much had not changed and yet so much had.  The town has really grown and the streets are extremely crowded with people, cars, bicycles and motorcycles.  Vehicle exhaust is prominent as there is no EPA and when mixed with the smoke from the numerous outdoor cooking fires, along with the humidity and dust, it does not produce a very good quality of air to breathe.  On the compounds of the seminary and hospital where the missionaries used to live, most buildings and houses are still there but many new ones have been added and the town now surrounds the compounds with houses where only the bush used to thrive.  But I remember having the feeling of being glad to see the new along side the old.  Most things looked much smaller than when growing up, except for some of the trees which have grown a lot bigger over the years.  I remember you could stand in front of our house and see all the other houses down the dirt road.  But now, the trees hide them from the view.  The dusty dirt road from our house down to the end of the compound always seemed to be a long hike and from the hospital to the seminary compound seemed like an eternity to walk or ride a bike to and from.  But when I recently made that hike (several times a day) it did not seem as far and long, just hot! Some of the things that have not changed over the last 40 years are the things we take for granted here in the good old USA.  Electricity is still not reliable and is sporadic, coming on at random times.  A/C is very much a luxury in homes.  Plumbing for water is not good and not everyone has piped water to their homes and must carry it from a community well. The hospital and seminary have had deep water wells dug that provides enough water to supply the people on the compounds.  This was a result of a project from a couple of years ago that many missionary kids who grew up in Nigeria, got involved in and raised money for the drilling of the wells.  Prior to the wells, water had to be purchased and brought in by truck to fill the tanks that supplied the water to the hospital and seminary.  The roads are still not well maintained with pot holes everywhere, some very large.

The people are still just as friendly and everywhere I went, were so gracious, saying “you are welcome,” meaning that you are welcome here.  My Yoruba greetings came back to me as I tried to be as much a part of the people and culture as possible.  It was really quite a comfortable feeling to be among the people.  I felt that they genuinely welcomed my being there.  The stories I shared of being born and raised in Nigeria brought me much stature and credibility to the people, especially when I introduced myself using my Yoruba name.  This proved to be very valuable as I was going through customs at the airport.  The inspector at first did not believe I was “A Child of Ogbomoso” and requested to see my passport for proof.  After seeing for himself my place of birth, he must have been impressed and quickly said to me, “Welcome home,” and then told me to pass on through the inspection line.  I had remembered that “trick” as a child when traveling across country with the family when we came up to an army road block.  The soldiers were looking for guns, I suspect, and instructed Dad to unload all the supplies that were in the trunk of the car.  Then, us boys begin to speak Yoruba greetings and speaking pigeon English to them to the point where they were more interested in us and the fact that these little white faces were speaking like them.  So, they waved us on without searching the entire car.  I think Dad was most appreciative as he did not have to unload and reload all the supplies.  Little did I know that 40 years later, I would have the opportunity to use that experience to help out in a similar situation.

It was very meaningful and special to get to see several people that worked with Dad at the hospital and to see once again, the pharmacy that he cared so much for, although it was not near the neatly organized place that it was when he ran it.  Outside the pharmacy, along one of the corridors, was a collage and collection of pictures of the missionaries who worked at the hospital.  There were several pictures of Dad and when I introduced myself to the people around me as being the son of the one in the picture, you would have thought I was royalty the way they greeted me.  I think that being able to see a “descendant” of one of the missionaries was quite an honor to them.  They hold so much respect and honor to those who served in the early days of the hospital.  I also got to see many of the people that worked for our family and some very special friends who helped “raise” us kids.  Our cook, gardener, washman, and babysitter were all there.  They are now very successful in their lives and have families of their own.  One thing that each of them said over and over was how grateful they are to Mom and Dad who helped them get a start in their lives.  One is a distinguished professor at the seminary, one is a “master” teacher, one is a retired colonel from the army, one is a business man who owns four print shops, and one works at the hospital.  All have become productive citizens and have kept their Christian faith.

The house I grew up in (painted sky blue) is still there, including the path leading from the dirt road to the front porch.  I thought I saw Dad walking down that path coming home from work.  There used to be a pair of tall trees in front of our yard next to the dirt road. They were both favorite trees for the neighborhood kids to climb.  At the top of the trees, you could see for miles.  How tiny the shiny (some rusty) tin roof tops of the town looked and how far out it was beyond where the bush began and never seemed to end.  Now the town is everywhere and only one of the two trees is still there.  Sadly, I did not get a chance to climb it this time.  But, some of the trees I used to climb are still there, but where we had citrus trees growing in the side yard, was now overgrown with bush and trees and much to my disappointment, our favorite guava tree was no where to be seen, either cut down or swallowed up by the encroaching bush.  I introduced myself to the Nigerians who live there now and they invited me inside to look.  It was awesome to be able to go through the house, looking at the rooms that I used to play in.  I wanted to roll on the floor and hug the walls in order to absorb all I could of the house, but I held back, thinking it would probably not be the right thing to do.  I walked through the living room and on to the kitchen.  My mind was racing with images of the past.  I continued on through to the storage room/food pantry and on to the little nook where Dad had his “office,” just barely big enough to fit a desk and some overhead shelves.  Outside, near to the side of the house, the single car garage was still there.  This is where I had first, second and fourth grades along with other MKs living in Ogbomoso that were too young to go off to Newton (boarding school). 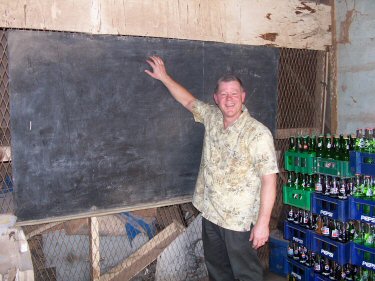 (at right).  Behind the house is a cement walkway that butts up next to the outside wall which led to the back door. Much to my amazement, there were three little outlined handprints, created in 1967, with the names of Ken, Tom and Ron respectively written next to each one, still embedded in the concrete.  At this point, I could not hold back the emotions and the tears were uncontrollable as I wept.  It was beginning to sink in; the realization that I was back from a 38 year absence.  The feeling was indescribable, like being in a dream yet being all too real.  I kept thinking how I wanted the rest of my family there to experience this incredible moment with me.  Only they would be able to relate to what I felt at the time.  However, I’m so thankful that my other family of MKs were able to make the journey back home with me.  It was like a reunion for us, where we could share and relive our childhood.  It would not have been as wonderful and special if they weren’t there to share the experience together.