Nigeria is a nation of great diversity, with hundreds of tribes and languages, and distinct religious differences. These can be significant barriers to mutual respect and cooperation. Paul Kato worked for years trying various approaches toward cooperation among people of different backgrounds and faiths. Ultimately he committed to opening a boarding school where diverse students would receive a quality education while they also learned to work together in teamwork. 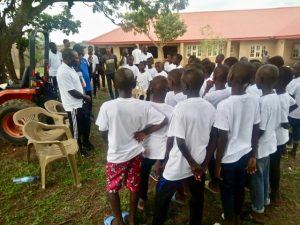 Kato is a high school teacher and coach in Michigan who was born and raised in Nigeria. He is dedicated to making life better in the country of his birth. After trying other approaches to create unity among diverse high schoolers, he found that the target age should be younger for the school he wanted to create. The best available site was in Kwoi, Paul’s home town, using abandoned school buildings that needed extensive renovation. Preparing the new school has created jobs for local brick layers, maintenance workers, cooks, and school administrators.

Kato shared his vision with the NFW Council in 2013. Money was given toward the renovations, along with a matching challenge to boost other fundraising efforts. A lot of money was raised by his students in Michigan. Some of them went with him to Kwoi several times to help with the renovations. “Some of these kids had never been outside of Michigan before,” he said. “Going to Africa had quite an impact on them—they got to see how people live in another part of the world, and African kids taught them how to live with joy!”

Kato International Training Academy opened in September 2018 with a class of 35 boys whose ages are comparable to US grades 7-8. Each year a new class will enter and the previous class will move up, until a full high school is achieved. The students are developing dreams and goals that will lead to growth in confidence, spirituality, valuing others, self-sufficiency and success. One of the tools being used is the team sport of soccer.

There are still important needs to be met—especially a bus so the soccer team can travel to away games, and a kitchen. Currently meals are prepared at the home of Paul’s mother, which is a mile away from the school. Fees of about $350 per student per term don’t cover the full operating costs, and the shortfall is being covered by Paul and his wife. But the dream has come to life.

“This journey has not been easy and at times actually seemed impossible. God has always provided when it seemed that surely we were at the end of the road. We continue to live in faith and depend on God’s provision.”
—Paul Kato