During a trip to Obinze in August 2018, NFW representatives were given a tour of the Baptist College of Theology there by the new Rector (president), Dr. Kenneth Enyubarra. Many of the buildings, particularly the classrooms, had not been well maintained over the years due to lack of funds. Several classrooms had roofs that were leaking, and many had broken or missing windows. Dr. Enyubarra expressed his regret that the students had to endure these conditions, and hoped that he would be able to rectify the situation as soon as he could obtain funds. One of the buildings, known on campus as the Annex—something like a student centre—where students often met to study and discuss their classes, was in the worst condition.

The school was begun as a Bible school in 1960 by missionary Russell Locke, and later became a three-year pastors school offering a certificate in theology. After being closed 1968-71 during the civil war, it was reopened and upgraded to a five-year program by missionary Don Reece who served as principal and his wife Gwen served as a teacher. Since then many students from all over Eastern Nigeria have graduated and gone on to college or seminary. 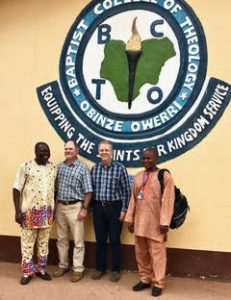 When the NFW Council convened in September 2018, we decided to send funds to the school to begin renovation of the Annex. The funds were sent, and work has begun on the roof, walls and windows! Nigeria Faithful Works is excited to be involved with the ongoing development and sustainment of the Obinze School of Theology as it continues to prepare young men and women for ministry and other career paths.

But there is a lot left to do! Please help us continue to support this institution as it moves into the future!