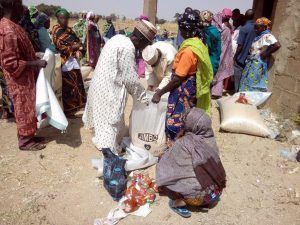 A severe drought coincided with an economic recession to wreak havoc on available food supplies in Northern Nigeria in 2016, causing widespread hunger and suffering.  A Baptist outreach organization across seven states struggled with meager resources to help keep starving people alive. Widows and their families were hit especially hard.

A pastor, trained some years ago as an outreach strategy coordinator, had formed a team which operates in seven states of northern Nigeria, intervening in crisis situations to provide medical care, provide lodging for people chased away from home, relief to refugees of religious violence, and famine relief. He has the support of his church to spend the necessary time, and the members help regularly with transportation and logistics for these ministries.

The NFW Council wanted to assist in this crisis, and undertook the most ambitious fundraising drive in our history. Most of the money raised went for feeding efforts. Church members in Nigeria provided all the transportation costs on the ground and distributed the food. Part of the NFW funds were earmarked for things that enabled widows to learn to make a living in micro businesses such as sewing, poultry farming, craft and jewelry making, and other endeavors.

Project Nourish saved many lives from starvation, and from illnesses caused when malnutrition lowers physical resistance. Jobs and job skills were created that led to sustained employment for the widows. Both the drought and the recession eased after this emergency project was carried out. When NFW members visited one of the churches in 2017, they were greeted by a group of widows who gave them samples of products they had learned to make and sell, giving them a steady source of income.