The lack of sufficient water can be a drastic problem for a large facility, and can often happen in under-resourced institutions. Planning for plentiful water is vitally important. 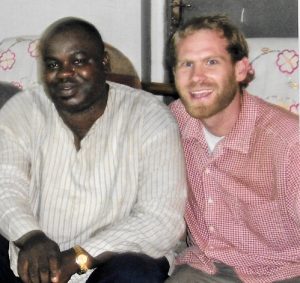 In 2007 NFW volunteer engineer Chris Strock performed site assessments regarding water at multiple institutions throughout Nigeria and made professional recommendations to the institutions’ administrators.

Bowen University in Iwo was in the process of expanding for a dramatic increase in student population; future water needs were quantified and solutions identified.

The Baptist Seminary in Kaduna suffered from insufficient water at its current campus and had purchased land across the city for future relocation. Assessments and recommendations were given for both locations.

The Baptist Medical Centre in Saki had a plentiful well but no piping distribution system. Water had to be delivered daily throughout the large campus by a tanker truck. A new pumping and piping system was recommended. (This became an NFW project that was successfully implemented in 2009.)

The Baptist Hospital in Eku had a central overhead water tank that was rusting. Advice was given on how to treat the rust and prevent against it in the future in order to preserve the hospital’s water supply.

In Ogbomoso, trouble spots at three places—the Baptist Medical Centre, the Health Service and the Blind School—were evaluated and solutions were recommended for each.

Chris’s transportation was provided by his friend Tunde Adenowo, whose Sabatek drilling company had performed previous well projects for NFW. The Nigerian Baptist Convention provided for lodging and meals.

“We are thankful to Chris for his expertise, and to NFW for providing these valuable assessments that we can use in our future planning.” —Dr. Ademola Ishola
General Secretary,
Nigerian Baptist Convention