In 2016 the only source of water at Kwara Baptist Hospital was an oil-contaminated well without plumbing. And if that wasn’t bad enough, the well dried up during the dry season, leaving the medical facility with no water at all. In November 2015 NFW’s biomedical expert Rob Dickinson made a trip to Okuta with his biomedical trainees and found that a water supply was a pressing need for the hospital. NFW appreciated the initiative of area Baptists in establishing this hospital and wished to help. Ideas were discussed and a plan was formulated.

Okuta is in Kwara State, very near the border of Benin. It is quite isolated and difficult to reach, and as a result has lagged behind in needed infrastructure. A one-room medical clinic was begun in the 1950s by missionary nurse Margaret Dunaway, and it is this ancient structure that was the starting point for the Kwara Baptist Hospital. 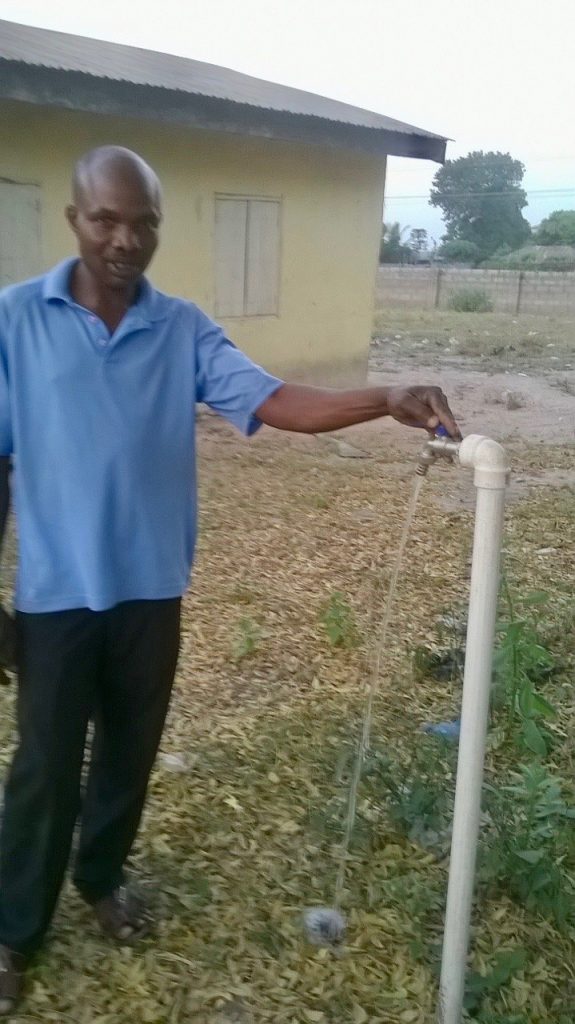 NFW representatives Baker Hill and his brother Richard undertook to supply the hospital with clean and abundant water, with valuable help from the biomedical team of Rob Dickinson, Segun Ogunlana, John Edor and Sunday Ayano. They utilized three existing nearby underground cisterns used to collect water during the rainy season and store it for use during the dry season. An existing overhead tank was used to gravity-feed pressured water to the system. Repairs were made to gutters that fed the cisterns. Two floating 12-volt pumps were put in, powered by new solar panels purchased in Nigeria. Finally piping was installed to link the new system to the hospital.

The project was successfully completed in November 2016, giving the hospital a continuous supply of clean water year-round, with minimal maintenance needed. Dr. Abdul and his staff were delighted, as were the members of the local Baptist Association which supervises the hospital.