NFW undertook a project, with the invaluable help of the biomedical team in Ogbomosho, to supply the new Kwara Baptist Hospital, located in Okuta, Kwara State, with clean and abundant water. We found that their only water source was a well contaminated by oil from a mechanic shop, without plumbing, and that the well went dry during the dry season, leaving the hospital without a water supply at all.

A visit was made to the hospital in May, 2016, by Baker Hill and his brother Richard, accompanied by the biomedical team of Rob Dickinson, Segun Ogunlana, John Edor, and Sunday Ayano. It was found that there are three large in-ground cisterns near the hospital, normally supplied by gutters from the roofs of two houses and a church. However, the gutters were broken and disconnected, and no water was entering the cisterns during the rainstorms. We provided funds to repair the gutter systems as well as an overhead tank for the cistern at the highest level, and then connected the cisterns with plumbing to the hospital.

We also supplied two 12-volt pumps on floating platforms, connected to solar panels for power. The idea for these pumps came from an IMB missionary to Senegal, Travis Forsythe, who uses them to irrigate an agricultural project. He used a square of PVC pipe to float his pumps, but we found that the PVC pipe available in Nigeria had less than 90-degree angles and were quite difficult to make into a square. The biomedical team came up with a workable solution using plastic float balls available in the market, under an aluminum platform sourced from decommissioned medical equipment. The floating pumps are placed inside the cisterns and follow the seasonal water levels to supply water to the overhead tank for pressure through flexible hoses. Numerous problems and delays were encountered due to the remoteness of the hospital, but thanks to the dedication of our biomed team at Ogbomosho, the project was finished in November 2016 and the hospital has a clean, year-round water system with very low maintenance required. 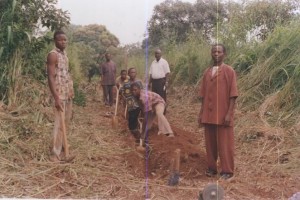 The Baptist Medical Centre in Saki has a new water distribution system that provides clean water to all buildings on the large compound.  This is the result of a cooperative project between the medical centre and NFW that was completed in February 2009.  The successful project greatly benefits the medical care of patients who come from the extended Saki area, plus the thousand people who live, work, worship or go to school on the compound. 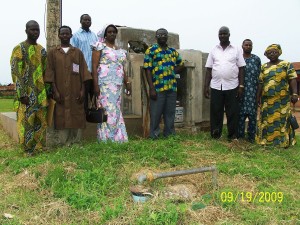 Dr. Ojebode (center) and the hospital staff celebrates the completion of the project. The pipes from the borehole that feeds the system are coming out of the ground in front of the staff

Medical director Dr. T. O. Ojebode remembers the water distribution problem the centre had been facing.  “We have an excellent well, but for many years we had to distribute our water to all points on our compound once a day by an aging tanker truck—a little at each building.”  With Gita Larson’s visit in 2005, the need for better distribution was identified.  An improved system was needed to achieve adequate sanitation levels for the large hospital, staff housing, and schools.  The centre requested help from NFW. 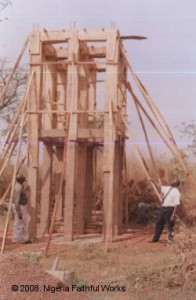 Medical director Dr. T.O. Ojebode (at right) and administrative director Mr. M.A. Olomitutu inspected the construction of the tower while it was under construction

Construction plans were drawn up by NFW volunteer engineer Chris Strock.  Dr. Ojebode managed the project with consultation and guidance from Rev. Taiwo Wojuola, a skilled plumber who has been involved in previous NFW water projects in Ogbomoso at the hospital and seminary there.

The work included erecting a pair of large overhead master tanks on a tower at the highest point on the compound, and installing a new system of pipes to gravity-feed the water to smaller holding tanks on raised platforms just outside each building.

NFW provided funding for all equipment and supplies, and medical centre staff provided all the labor, including digging underground trenches, connecting all pipe sections and fittings, constructing the tower for the master tanks and the platforms for the many smaller holding tanks, and installing all equipment including pumps and valves.

Dr. Ojebode said, “We are thankful that life is easier now at our medical centre. Sanitation is much better, and we no longer have the expense of trucking the water to all the places where it was needed, a little at a time.  Now we have water on demand all the time, and everyone here is excited about that.  We have sufficient water through the love of NFW.  May God bless everyone linked with NFW.”

Chris Strock is a civil engineer with experience in water systems in developing countries who is currently completing a doctorate in engineering at Virginia Tech.  He has made three trips to Nigeria as a volunteer for NFW, and has given valuable guidance on all NFW water projects.  In 2007 he assessed the water needs of institutions at four sites in Nigeria. His transportation, lodging and meals were provided by the generosity of the Nigerian Baptist Convention.

Bowen University in Iwo is in the midst of a large expansion that includes an increased student population and dramatic building construction.  Chris studied the future water needs and provided recommendations that can be implemented in stages as construction proceeds on academic buildings and dormitories for 5,000 students.

The Baptist Seminary in Kaduna is presently located in one section of the city, but has purchased land at another site for eventual development.  Currently there is no timetable and no funding for relocation.  The water supply at the current campus is intermittent and insufficient.  Chris visited both sites and provided long range recommendations for each.

The Baptist Medical Centre in Saki has an existing well with excellent production, but distribution depends on an ancient tanker truck that leaves a little water at each patient ward, residence and a school daily.  Chris drew up plans for a new distribution system of piping runs and holding tanks so that the compound could have a large overhead tank for the entire compound with increased gravity flow to each building on the compound.

At the Baptist Medical Centre in Eku, Chris assessed the current water system and gave guidance on how to treat rust on the central overhead storage tank and prevent against it in the future.

In 2006 two deep wells were successfully drilled by Sabatek, Ltd. for the Seminary in 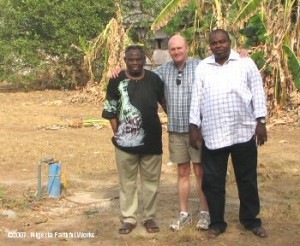 The new wells provide enough water for the compound’s needs, and have been accompanied by improvements in the water distribution system carried out by the
seminary maintenance staff.  One well is located near the Frances Jones guest facility and the other is near the seminary petrol station.

Taiwo Wojuola, a seminary student and experienced plumber, represented the seminary as the work progressed and was a valuable member of this project.

Professor Joseph Ilori, then president of the seminary, expressed appreciation to NFW and the donors who made the project possible.  He said that soon after the completion of the wells that the seminary was able to host a conference of 800 pastors.  He said, “There is no shortage of water.  I am happy that we did not need to spend funds to purchase water.”

In 2005 a deep well was successfully drilled by Sabatek for the Baptist Medical Centre in Obgomoso.  Prior to that BMCO had been struggling to meet its water needs with several shallow wells that were barely producing, and by purchasing water from an expensive vendor in the city.  It is impossible to operate a sanitary hospital without an adequate supply of clean water. 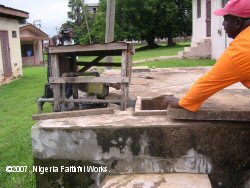 Tank holding water from the new well at BMCO

With oversight from NFW volunteer Chris Strock and Tunde Adenowo of Sabatek,
the new well penetrated a layer of rock and tapped a deeper aquifer of plentiful, clear water.  The hospital now has an abundance of water.  A three horsepower pump produces about 30 gallons a minute to supply the hospital and residences on the compound.

Burster Iyere, who was the hospital administrator at the time, expressed the staff’s gratitude.  “NFW works with us as partners in progress.  They ask about our needs and priorities and work with us to achieve them. This helps us realize our own dreams and makes our institutions stronger, and gives us confidence in ourselves that we can move forward on our own.” 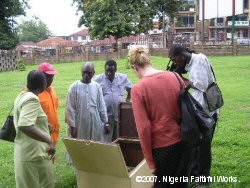 While the box may not look exciting, the well head inside is cause for great celebration because it represents a reliable source of water 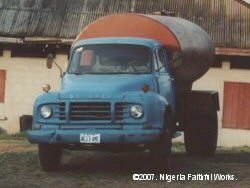 Water source before the deep well